The British Postal Museum & Archive on the way to a new, first class museum

Home / The British Postal Museum & Archive on the way to a new, first class museum

The British Postal Museum & Archive (BPMA) is delighted to announce that the Heritage Lottery Fund (HLF) has confirmed a first-round pass¹ for a grant of £2,617,800, including development funding of £117,800 for the project to move its fascinating collections into a new, accessible and permanent home.

The aim of the move is to give the public access to the unique collection of the former National Postal Museum, which has been in storage since 1998, as well as ensuring the best possible future care of the Royal Mail Archive, documenting 400 years of the post, currently stored in cramped and inaccessible conditions.

The BPMA collections include iconic objects such as red pillar boxes and postal vehicles, as well as every British stamp issued since the Penny Black, original design artwork, posters and photographs.

“The British Postal Museum & Archive has a fascinating and varied collection and archive. The Heritage Lottery Fund is delighted to have pledged our initial support to this project that will unite the collections and open them up for everyone to enjoy. The opportunity to restore the important Chain Testing works and equipment, which is such an important part of Swindon’s heritage is also welcomed. Swindon is an area where we are keen to support good projects, and we look forward to working with BPMA in the future and seeing this project progress.” 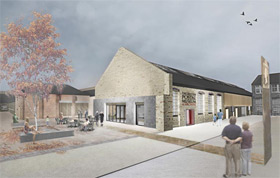 The new Postal Museum & Archive will be situated in the historic former Great Western Railway Chain Testing Works in Swindon, Wiltshire, joining an existing group of prominent cultural organisations based on the site, including English Heritage, the National Trust and STEAM, Museum of the Great Western Railway.

The new centre will also enable a vast expansion of its educational programme and work for young visitors.

The first-round pass means that The British Postal Museum & Archive can begin the development stage of the project and work up detailed proposals ahead of a round two application in 2011. Further work to secure funding for the ambitious £19 million project will now begin with a public fundraising campaign taking place in 2011. A phased opening of the new centre is planned for 2013.

“The British Postal Museum & Archive is very pleased that the Heritage Lottery Fund has given initial support for our project. HLF money will allow us to embark on the next stage of this exciting project to bring this human story of communication, industry and innovation to everyone. The Chain Testing Works in Swindon is an ideal home for our collections and offers an opportunity to restore and reopen this landmark building.”