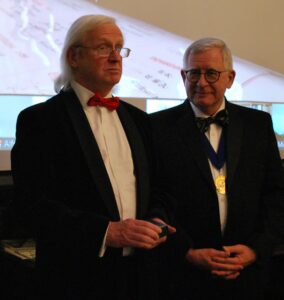 The 2022 Congress Medal has been awarded to Michael J Roberts of Huddersfield.  Mike’s philatelic life can be traced back to his fourth birthday when he started collecting. He joined Huddersfield Philatelic Society aged eight and four years later was Junior Representative on that society’s committee. Sixty years later he remains a member having fulfilled a number of committee positions in the intervening years.

Mike has proved there is enthusiasm for local societies. As a firm believer in daytime meetings, he proposed establishing West Riding Stamp Club, acting as contact for many years.  Interestingly, the Club does not, by choice, have elected officers. Similarly, in 2014 he established Cockermouth Stamp Club with Mike Mapleton.  This has grown to twenty local members, plus many more joining its Zoom events.  Through Mike’s enterprise in organising two auctions a year, now with 500+ lots per sale, both clubs have raised their profile within the wider philatelic and local communities.

Not content with just being a member of various specialist societies he has held office in the West African Study Circle and the Sarawak Specialist’ Society and is currently the secretary of Cumbria Postal History Society.  He founded the Pakistan Study Circle in 2000 with three other members since when he has been active on the committee.  At the same time, he has served on the Council of the Royal Philatelic Society London and is currently a Regional Representative and has been the former Secretary, President and Chairman of the Society for Postal Historians.

From grass root societies to International Exhibitions Mike is very active in all categories of philately.  He was a member of the Organising Committee for the London Internationals held in 2010 and 2015 and is a member of the Core Team for London 2020/2022, with responsibility for staffing.

As a keen numismatist he has encouraged links between stamp collectors and coin collectors, giving philatelic displays to the latter and lecturers on various numismatic topics to the former.

Mike has been a keen supporter of ABPS and a Friend since its inception.

For upwards of twenty years Mike has provided advice, usually on a pro bono basis, to executors and family members regarding the disposal of philatelic material.

Mike Roberts was nominated by Cockermouth Stamp Club and the Society of Postal Historians and is a worthy recipient of the ABPS Congress Medal for 2022.

The Congress Medal was inaugurated in 1959 at the 50th Anniversary Philatelic Congress of Great Britain held at Torquay. The first recipient was Wilfred Haworth, a well known philatelist at that time. This prestigious medal, together with a lapel pin, is presented to just one person each year at the annual ABPS Philatelic Congress of Great Britain in recognition of dedication and voluntary service to British philately at national level.

Among the recipients were Mr and Mrs Harry Green in 1962 and 1963, the first husband and wife to win the medal. The 1966 award was to Fred Myers, whose daughters Jean Wood and Susan Moore also attended Congress regularly; when Jean herself was awarded the medal in 2007, that made them the only father and daughter to be presented with the award. Mrs Kay Goodman, a keen worker with youth philately, and who has a lecture at Congress named after her, won the Congress Medal in 1976.

The full list of Congress Medal winners is below: An asterisk signifies deceased