A signing ceremony for the Roll of Distinguished Philatelists takes place annually at the Philatelic Congress of Great Britain, and has done so, with the exception of the war years 1941-1945, at every Congress since.

An invitation to sign the Roll is regarded as the world’s pre-eminent philatelic honour. 356 philatelists from 40 countries have achieved this distinction. There are at present 76 living Signatories from 24 countries.

The Board of Election is composed of eight Signatories to the Roll, of whom four must reside in the United Kingdom. The Secretary is the Keeper of the Roll, and the Board meets annually to consider nominations and agrees the names of new signatories, which are at its absolute discretion. 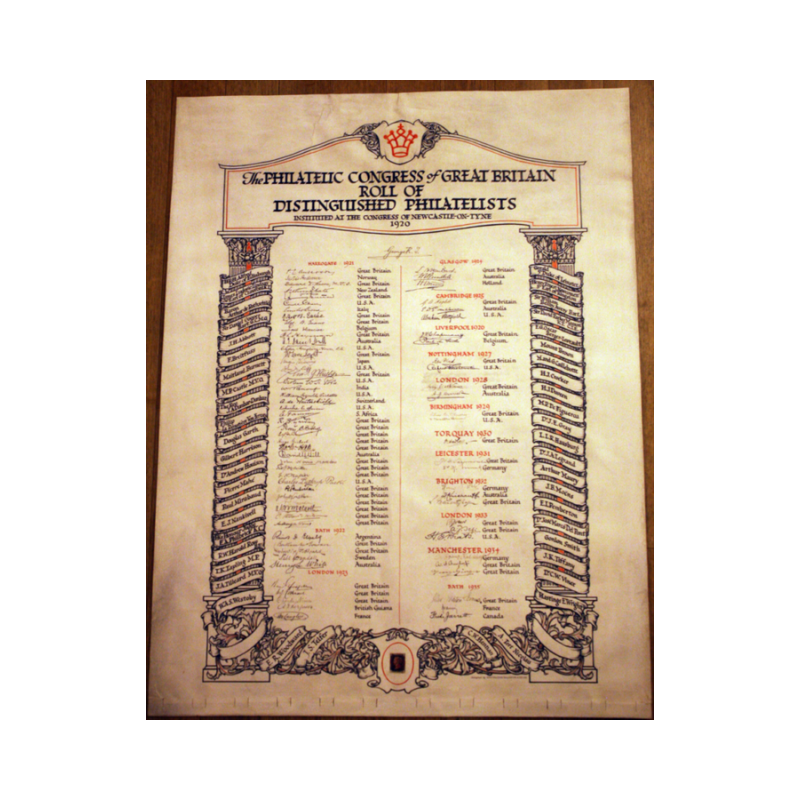 Rules To Govern the Election of Distinguished Philatelists

Each year the Board of Election for the Roll of Distinguished Philatelists is reminded that there are a large number of collectors worldwide who are making an active and significant contribution to the furtherance of philately.

Many proposals are put forward either by RDPs or by appropriate societies as potential signatories of the Roll, but this is a rare honour and from the many only a few will be chosen. The task of selection is not easy. The Board members (four from the UK and four from other countries) have together an extensive knowledge of collectors and it is safe to say that all the candidates proposed will be probably known personally to at least one member of the Board.

The proposal form has been designed to accommodate sufficient pertinent information and in fairness to the candidate it is important that the form is properly completed. Well prepared forms help the Board, and the following is offered for guidance.

It is the responsibility of the proposer to decide what information is included on the proposal form. However, it is not acceptable for a multi-page curriculum vitae prepared by the candidate merely to be attached to the form. If a candidate is President of a National or International Society or Federation, the date of election to that office and the total years with the organisation should suffice. The years and months marking the stepping-stones to high office as for example Chairman or Vice President often add little to the qualification. Similarly, the detailed listing of Large Gold Medals gained for the same collection is often irrelevant particularly if the collection has been awarded a Grand Prix. The Board do not require copies of books published by the candidate or photocopies of articles written for philatelic journals.

The importance or otherwise of the above should be assessed by the proposer when completing the form. There should be no supplementary documents and only a single extra sheet of information will be accepted. The candidate should stand or fall by the qualifications presented by his proposer and not by the size of a dossier.

Election is by qualification and not by ballot. Informal contact in support of the candidate directed to RDP Signatories, Members of the Board or to the Honorary Secretary may well be regarded as ‘lobbying’ or ‘canvassing’ and is likely be counterproductive. A candidate should remain silent, and only the original nominator or other qualified nominator, or nominating body should add updates.

All correspondence on behalf of the candidate should be addressed to the Honorary Secretary.

An invitation to sign the Roll is a rare honour and since its inception in 1921 only circa 400 philatelists from some 40 different countries have become signatories. Selection is difficult and Membership of the Board of Election is no sinecure. Those Members who do not live in UK travel very long distances at their own expense to participate in the election of new RDPs and, as a courtesy to them, the proposer should help them in their deliberations and clearly indicate the basis on which, in their opinion, the candidate meets the necessary qualifications set out in the guidelines.

Nominations must be made on the special form obtainable from the Honorary Secretary to the Board of Election. Once nominated, a Candidate will remain on the list for four years, during which time their nomination will be considered at the annual meetings of the Board. After four years, nominations will lapse but may be renewed for one further period of four years by the submission of an updated nomination form, after a gap of at least one year.  The Honorary Secretary will publicise as widely as possible the time, place, and procedure for the receipt of nominations on an annual basis.

Organisations/Persons who may submit nominations:

Nominations may be submitted by:-

These and other relevant outstanding service to philately will be considered by the Board in making their decision:

Those nominating should note that an invitation to sign the Roll of Distinguished Philatelists is a singular honour and, for nominations to be successful, candidates need to be of commensurate distinction.

Information should be provided on the special form. This is intended to assist those nominating in identifying some of the criteria that will be fully considered by the Board. All nominations must have the prior consent of the nominee.

The closing date for the receipt of nomination forms by the Honorary Secretary to the Board of Election is 31st December, for consideration at the meeting early in the following year. Forms received after this date will be held on file and dealt with as part of the intake for the year after that.

No correspondence or discussion will be entered into concerning any proceedings of the Board of Election.

Please be aware that successful candidates and their nominators will be expected to attend the signing ceremony at their own expense.

Honorary Secretary to the Board of Election

A Brief History of the Roll

At a meeting of the London Stamp Club on 30th October 1919, Percy Cooke Bishop (1875-1959) proposed a scheme for rewarding and paying honour to those who had worked for the advancement of the hobby of stamp collecting. He accepted that some Societies awarded Medals and cited the Lindenburg Medal, but there should, he thought, be some world-wide recognition for those whose research had helped to place, and was keeping, philately on the high pedestal it presently occupied. To this end Bishop suggested a Philatelic Order of Merit – to be an award of no intrinsic value but marked by a suitably designed Diploma.

In the issue of Stamp Collecting for 24th November 1919 the proposal was re-iterated with some amplification. The Order of Philatelic Merit was intended to be awarded to collectors and dealers alike and there would be no expenses or fees attached. There would be no posthumous awards. It advised that a Council of distinguished philatelists had been formed and it was hoped that an announcement concerning its deliberations could be made in the near future.

On 13th December 1919 the magazine carried an illustration of the Diploma which had been designed and printed in two colours by Messrs Butler and Co. of St Leonards-on-Sea.

A proof of the Diploma was shown at the London Stamp Club meeting held on 15th January 1920.

On 18th March 1920 Francis Hugh Vallancey, (1879-1950) President of the London Stamp Club was able to report on the work of the Jury. The Constitution of the Order had been defined, and the first list of awards announced.

Two months after the awards had been made Stamp Collecting reported without amplification that the Order of Philatelic Merit was to be an important item on the Agenda of the 7th Philatelic Congress of Great Britain to be held at Newcastle-upon-Tyne from 25th to 28th May 1920.

An award entitled Order of Philatelic Merit had encountered much adverse criticism as it might appear to be imitating the various honourable Orders which were the prerogative of the Crown, and it was proposed to abandon this title.

The Permanent Executive Committee of Congress met on 15th June 1920 and in connection with the Award of Philatelic Merit resolved “that the twenty-five names to whom the Award had already been made should be accepted as worthy recipients without question by this Committee”. These were:

At the 8th Philatelic Congress of Great Britain, held at Harrogate from 3rd until 6th May 192 I, the Permanent Executive Committee was able to report the establishment of a “Roll of Distinguished Philatelists” and a scheme to govern the administration of such a Roll. Those who had made an outstanding contribution to the advancement of philately would be invited to sign the Roll and would be presented with a Letter of Thanks at Congress.

Not only was the Roll presented as a fait accompli but the Committee was able to announce “with feelings of pride and satisfaction” that His Most Gracious Majesty King George V had been pleased to permit his name to appear at the head of the Roll.

An intimation that they would be invited to sign the Roll had been sent to the philatelists who had been named at the Newcastle-upon-Tyne Congress (with the exception of A B Creeke, who seems to have been overlooked) and the Committee recommended that the following additional philatelists should be similarly honoured without question or discussion: