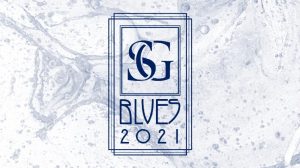 After more than 70 entries (27 in the Under 16 category) and over 1,400 votes, the second Stanley Gibbons ‘Blues’ single-sheet competition has come to a close and we are pleased to be able to announce the winners.This year’s judges, Simon Martin-Redman and Ian Gibson-Smith, “enjoyed the simplicity of the brief“, “loved the kids entries” and were “very impressed by the high standard that competitors could achieve within just one page“. It once again proved very difficult to select the winners from the entries – in fact both judges took time out from their own birthday celebrations to continue the debate!

After much deliberation a final decision was reached and we would like to congratulate John Davies as the overall winner of this year’s SG Blues Competition for his ‘Genesis of the Jubilee Envelope‘, which the judges described as complete, succinct and superb.

The full list of winners can be found below…

1st – John Davies: “It’s complete, so succinct, from concept to use. Superb.”
2nd – Malcolm Suttill: “It almost felt like a teaser for a larger exhibit that I would love to see.“
3rd – Edward Barrow: “There were two exhibits on this stamp. A fascinating story, told succinctly with good material. Good display indeed.”

1st – Niamh Cameron
2nd – Tanish Timma
3rd – Emily Packham
Both of our judges loved the U16 competition and the variety and creativity that it bought to the contest. Our winners will receive a copy of any single country catalogue of their choice, a voucher for £100 (1st), £75 (2nd), or £50 (3rd) and receive a mention within Gibbons Stamp Monthly (GSM).

And last but not least we come to the prize that has been voted for entirely by the philatelic public. And this year’s People’s Champ is Rajeev Sharma for his entry “The Long Walk Home: An Indian Army Soldier’s Journey through Italian POW Camps“. Rajeev received well over 200 votes and has won a £50 Stanley Gibbons voucher.

We would like to thank everyone who either entered or voted in this year’s contest – we wouldn’t be able to do it without you and it certainly wouldn’t be as much fun. We look forward to seeing you all again next year.