We are pleased to announce that the following philatelists were elected as signatories to the Roll of Distinguished Philatelists at the annual Board of Election meeting on 23rd March 2017.

This is one of the highest and most prestigious honours in philately, which recognises achievement, research, publication and service. The Roll was first signed in 1921 and this year’s signing ceremony will take place in Cardiff, Wales on Friday 28th July. They join 78 other current RDPs from 25 countries spread over five continents. More details on the Roll of Distinguished Philatelists can be found here.

Jon Aitchison FRPSL
Keeper of the Roll of Distinguished Philatelists and Secretary to the Board of Election. 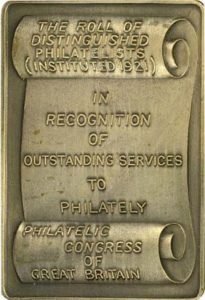 Alan lives in Buckinghamshire and has collected the classic stamps and the postal history of Great Britain for many years. His published works include The World’s First Postage Stamp, Secured Delivery Leading to the Introduction of Registered Mail 1450-1862, and recently he has co-authored The Mulready Postal Stationery.Added to these he has written a large amount of articles.

He has researched and formed extensive collections on all the above subjects and has exhibited them widely for the study and enjoyment of his fellow philatelists. He obtained the Grand Prix London 2010, and high awards in Traditional, Postal History, Postal Stationery, Literature and Single Frame exhibits and he works hard to promote philately in all the ways he can both in Great Britain as well as overseas. He is a most generous supporter of the hobby.

John is well-known throughout the western world but particularly in the United States for his literary work published since 1977. In 2013 he won the Charles J Peterson Lifetime Achievement Award for Philatelic Literature.

Regular columns contributed to a wide number of philatelic magazines have numbered nearly 3,000 and cover a very large variety of subjects.

His collections include such varied topics as Stamp Separation from 1840 to Modern Times, the 1934 United States and British Christmas Seals, Air Mail Markings on covers from the Korean War Zone and United States Postal Counterfeits, and World Rarities and Uniquities, a 400 page collection showing the breadth and depth of philately, which was presented to the Collectors Club of New York in 2013.

Steven lives in San Francisco. He is a serious student of many areas including classic France, the Franco Prussian War, Transatlantic mail, Classic United States and American Western mails and at present is interested in North American blockade-run mail from 1775 to 1865. He has formed high class collections of all the above subjects and exhibited frequently. His Franco-Prussian War Mail won the Grand Prix International award in Luxembourg in 1998 and the Grand Prix National at Philex-France 99 (the first non-Frenchman to do so).

He is an excellent writer and has been author or co-author of four award winning books. Mails of the Westward Expansion: 1803 to 1861 was awarded the RPSL Crawford Medal in March 2016.

He served as Treasurer of the Philatelic Foundation during his ten-year term as Trustee and holds several other directorships.