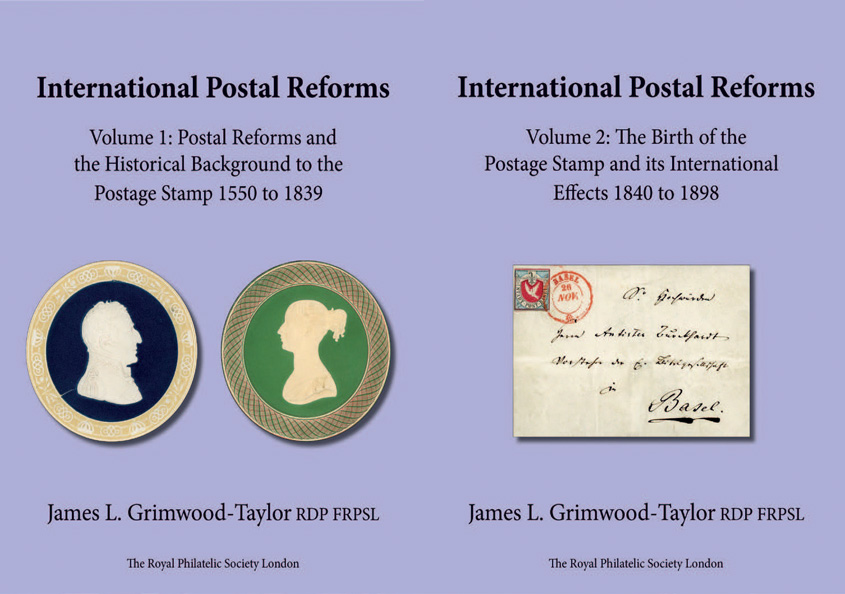 The first volume of this new examination of the history of international postal reforms, Postal Reforms and the Historical Background to the Postage Stamp 1550 to 1839, examines in detail Rowland Hill’s 1837 Post Office Reform; its Importance and Practicability pamphlet. It is usually cited as the sole source for the reduction of postage rates and the introduction of postage stamps – both labels and postal stationery – in Britain. This publication places Hill’s work in its true historical context and traces the origins of the high postal rates that he sought to reduce, starting from the posts of the Elizabethan Court and the European merchant princes of the 16th and 17th centuries. It then describes the early 19th century postal rate inflation in Britain and elsewhere, along with the careers of many reformers before Hill (including those in Britain, France, America, India and Australia). It shows that Hill was directly inspired to take up the study of the Post Office by earlier reformers including John Palmer and Robert Wallace.

Detailed analyses are given – for the first time in print – of the five different 1837-38 editions of Hill’s pamphlet, showing that the idea of postage labels was very much an after-thought, when compared to his assumption that postal stationery would be used for almost all prepaid letters, once uniform postage had been introduced. The international effects of Hill’s pamphlet – in France and in Australia in particular – are then outlined, along with the successful two-year campaign for Uniform Penny Postage that was undertaken by London’s ‘Mercantile Committee on Postage’. The latter’s astonishing array of printed propaganda, the Mercantile Papers that were masterminded by Henry Cole, are catalogued in detail for the very first time.

Also included is an analysis of the 17th century origins of Postage Stamps and an examination of early 19th century security printing. This volume concludes with three chapters on the famous ‘Treasury Competition’ of 1839, giving the most comprehensive listings yet to be published of the extant “Post Office Stamp” competition entries (some having been submitted by Americans and by Frenchmen).

The second volume The Birth of the Postage Stamp and its International Effects 1840 to 1898, traces the story of the introduction of cheap postage in Britain and around the world following the August 1839 “Penny Postage” Act. The most detailed analysis yet to be published of the experimental and very short-lived (5 December 1839 to 9 January 1840) “Uniform 4d Postage Period”, is followed by the story of how Uniform Penny Postage operated before the 1d Black and ‘Mulready’ stationery were made available in May 1840.

After a brief description of the creation of the world’s first postage stamps, a wide range of their 1840-41 usages is illustrated. This leads into three chapters describing exactly how the use of postage stamps by the ‘Early Adopters’ spread around the world up to mid-1850, most notably in Brazil, Switzerland and the U.S., but also in remoter areas such as Mauritius, Trinidad, Batavia, Peru, Bermuda and Australia.

Studies of the further postal reforms in Britain and elsewhere after 1840 follow, tracing Rowland Hill’s later career, and showing how the ‘Ocean Penny Postage’ campaigners inspired the worldwide movement for uniform postal rates that led to the formation of the General (later Universal) Postal Union in 1875.

The final chapter is by way of an Epilogue and focuses on the “unexpected legacy of Postal Reform” – Philately. It makes it clear that many of the earliest collectors of postage stamps (including some of the author’s own ancestors) were women rather than men. It then brings the story of philately up to the late 1860s, when the first ‘philatelic’ covers appear to have been created, specifically to enable their senders to obtain used examples of scarce or interesting stamps.

The author’s intention is that this two-volume work will, for the first time, place the early history of the postage stamp in the context of the ‘pre-stamp’ period, and show that they are both parts of the wider subject of Postal History.

The author, James Grimwood-Taylor, has been a stamp collector from the age of three and a full-time professional Postal Historian since the age of 22. He always intended one day to write the definitive study of how and why Rowland Hill’s reforms succeeded; this two-volume book is the result, illustrating more than 800 items from his own collections.

James has written two other books and over 200 Postal History articles over four decades. He has exhibited competitively since 1981, gaining International Gold Medals for his “British Offshore Islands” and “English Postal History” exhibits, while his “Postal Reforms” exhibit achieved an International Large Gold medal at ‘New York 2016’. His one-frame study of “Sydney’s early Overseas Mails to 1850” – won ‘best in show’ with a National Large Gold at York in 2015. He has been a National Judge at British philatelic exhibitions since the 1980s and has also judged overseas.

In 1982 James joined the Society of Postal Historians, was their Secretary from 1987-91, a Fellow from 1996, and President in 2002-03. He has also been Chairman of the British Philatelic Congress (2005) and President of the GBPS (2006-08). He joined the RPSL when professional philatelists were first admitted in 2005, being elected FRPSL in 2008. Just as this book went to the printers, he accepted the invitation to sign the prestigious Roll of Distinguished Philatelists.

The book is available from The Royal Philatelic Society London website. https://www.rpsl.org.uk/Publications