A History of The Royal Philatelic Society London 1869 to 2019 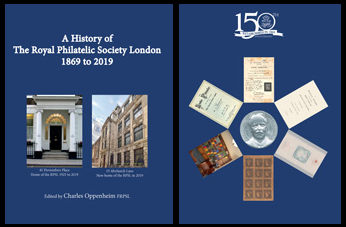 The Royal Philatelic Society London is the oldest philatelic society in continuous existence in the world. Its combination of research library, museum, research monographs, The London Philatelist, renowned expertising service and amazing displays by its members, not to mention its association with the British Royal Family stretching back well over 100 years, also make it the most prestigious in the world.
To celebrate the 150th anniversary of its creation, the Society commissioned this book. There are thirteen chapters, each written by a Fellow of the Society, and each looking at one aspect of the Society’s past and current activities. The chapters cover: management and finances; meeting places; meetings held; membership; royal patrons; honours, medals and awards; the Expert Committee; the Library; the Museum; its Philatelic Collections; its use of information technology; its monograph publishing; and its journal, The London Philatelist. Many appendices and an index support the text. The chapter on premises introduces the reader to what is indeed a new chapter in the Society’s history – its new home in Abchurch Lane in the city of London.
There have been official histories of the Society before; one to celebrate its 50th birthday in 1919, one for its centenary in 1969 and another in 2006 for the celebration of the centenary of it being granted the title “Royal” This latest volume not only covers those early histories thanks to the input of new research findings, but also updates them with developments right up the present day. The book is an essential reference work for all who are interested in the past and present of the Society.

The book can be purchased from the RPSL website. https://www.rpsl.org.uk/Publications