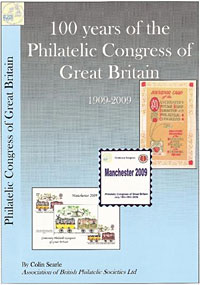 Colin Searle took over the Honorary Secretary role in the ABPS just a few months ago, after attending his first Congress, and having volunteered to be the Organising Secretary of the 2008 Stratford-upon-Avon Congress. He was so struck with the idea of Congress that he set himself the task of writing a book on the 100th Anniversary of the Philatelic Congress of Great Britain, for, and on behalf, of the ABPS. With enthusiasm he searched for collectors of PCGB material, through archives and libraries, and by the time of completing the book, he had scanned some 1,500 philatelic items. The book was written within four months yet appears to be a detailed research effort.

The book in content lists each of the Philatelic Congress and provides examples of many of the souvenirs produced at these Congresses, as well as listing papers presented, and in most cases, contemporary photographs. To this are added detailed listings of the Congresses, signees of the Roll of Distinguished Philatelists, Congress Medal winners, and ABPS Award of Merit winners.

The book is important for at least two reasons. It provides so much detail of the history and development of stamp collecting within Great Britain, perhaps the first time that it has been presented in such a format, and that the author has brought alive the many characters that make up the background stories of philately in our country. At the cheap price offered, it is a must for any collector to own.