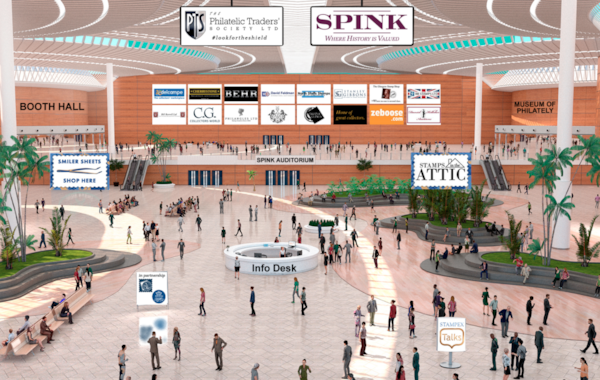 The very first Virtual Stampex took place recently with thousands of collectors from around the world coming together for three days of trading, exhibits, talks and socialising.

With Covid19 making most physical events impossible, the committee of the Philatelic Traders Society (PTS) opted for an innovative solution, providing a virtual conference complete with stands, an auditorium, and the ability to chat with traders via text, audio or video. Suzanne Rae, PTS Chairman told Stamp Collector magazine: “I said before the show that I could not be prouder of what the PTS Team has delivered in bringing this bold concept to the international philatelic stage, but now that I’ve seen so many of our members chatting live at the show with some incredible booth content and designs, I’ll add that I could not be prouder of our PTS Members – for stepping out of their comfort zones, for acting professionally and authentically, for passionately promoting the hobby and for working across time zones to give collectors from around the world a truly unique and inspiring Stampex experience.’

The online event featured a Booth Hall with over sixty stands. Visitors to the booths had the option of visiting the organisation’s website and chatting to the representatives on the stand.  Tracy Porter of Empire Philatelists said: ‘Virtual Stampex was a new concept for us but it worked really well. A steady stream of enquiries, a lot of requests for valuations and a definite increase in orders, showed us that the collectors were more than happy to give this “new normal” a go.’

Richard Monteiro, of zeboose.com was also pleased with the new format. ‘Virtual Stampex was a no-brainer for us – we’ve been online since 2012 – and it turned out to be the resounding success we were expecting,’ he told us. ‘Blistering business. And a great place for seeing familiar faces and making new friends. Yes, we’ll be at the next Virtual Stampex. And the next…’

The range of talks in the auditorium, sponsored by Spink, included topics such as:

Following the success of the Summer of Stamps virtual festival (at allaboutstamps.co.uk), and the American Philatelic Society’s Virtual Stamp Show, the popularity of Virtual Stampex suggests that the online format of stamp events has worked well, and could be a permanent addition to the stamp calendar, even when physical events return. All About Stamps Editor Matt Hill added: ‘We loved having a stand at Stampex and being able to chat to so many people. Of course, nothing beats meeting fellow collectors face to face, but actually the virtual version gave everyone the opportunity to be sociable and there was a clear sense of excitement at this new way of doing things. We’re also excited to be continuing our own online events with a special weekend dedicated to GB stamps, set to take place on 13-15 November [see page 9]. Despite the challenges we all face, the hobby is thriving!’