ROYAL MAIL STAMPS TO HONOUR HEROES OF THE PANDEMIC

Home / ROYAL MAIL STAMPS TO HONOUR HEROES OF THE PANDEMIC 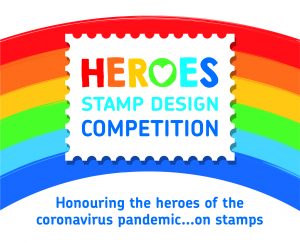 ·       The competition is open to children aged 4-14 through school entries or independently via parents, home educators, carers and clubs

·       The Prime Minister Boris Johnson, said: From our family members, teachers, doctors and nurses to our vaccine scientists and fundraisers, we want to recognise and remember them

·       The eight winning stamps will be picked from 120 regional finalists

·       The winners will follow in the footsteps of highly acclaimed children’s designers and illustrators who have designed stamps in the past, such as, Quentin Blake (2012), Nick Park (2010) and Axel Scheffler (2012)

·       The eight winners will be announced in the Autumn

·       Full details can be found at www.royalmail.com/stampcompetition

The Prime Minister Boris Johnson and Royal Mail today announced the launch of a stamp design competition for UK schoolchildren to mark the important role played by key and frontline workers, as well as others, during the pandemic.

The competition will give children, aged 4 to 14, the chance to design an official Royal Mail stamp as part of a special set of eight. Children will be asked to think about who their hero or heroes are, and to design a stamp in their honour.

A special panel of judges will determine the winning designs which will feature on a set of eight Royal Mail stamps and appear on millions of items of mail across the UK. The stamps will celebrate the many who have done great things since the start of the pandemic and helped the country through people a very challenging period.

The subjects are wide ranging. Children may choose to illustrate frontline workers who work in health or social care. They may also want to celebrate some of the millions of key workers who have helped keep the UK connected during this time. This could include, for example, refuse collectors, cleaning staff, teachers, supermarket workers, public transport staff, delivery drivers and, indeed, postmen and postwomen. There have also been many volunteers who have helped in their local communities or raised money for charity, such as Captain Sir Tom Moore.

Full details can be found at www.royalmail.com/stampcompetition

As with all Special Stamps issued by Royal Mail, the final eight stamps will be sent to Her Majesty The Queen before they can be printed and issued.

The winners will follow in the footsteps of highly acclaimed children’s designers and illustrators who have designed stamps in the past, such as, Quentin Blake (1993), Nick Park (2010) and Axel Scheffler (2012).

Prime Minister Boris Johnson said: “The last year has been one of the most difficult any of us can remember, but throughout it all our Covid Heroes have been there for us, inspired us and done so much for others.

“From our family members, teachers, doctors and nurses to our vaccine scientists and fundraisers, we want to recognise and remember them.

“That’s why we’re launching a special competition with Royal Mail for children across the country to design a new stamp collection featuring their Covid Heroes – so we can honour their tremendous work.”

Simon Thompson, Royal Mail CEO, said: “We are so excited to launch this competition and give eight UK schoolchildren the opportunity to use their own creative flair to celebrate the heroes who have gone above and beyond during the pandemic. Over the past year there have been so many wonderful examples of people who, despite much uncertainty and fear, have continued about their work with such admirable determination and pride. They have helped us cope during what has been an extremely testing time. I look forward to seeing the winning stamp designs – best of luck!”

The competition is open to children aged 4-14 through school entries or independently via parents and home educators. Childminders, volunteer leaders, carers and clubs can also enter children into the competition.

Schools, and parents/guardians of home-schooled children, can sign-up to the competition online or by returning the application form in a pack sent to them by iChild, the online educational resource centre, in association with Royal Mail.

Applications for the 6,000 available resource packs will be sent out on a first-come, first served basis. Entries must be received by the closing date of Friday 28 May 2021. The winners of the competition will be announced in the autumn and the stamps will be available in the spring of 2022.

Royal Mail will select 120 regional runners-up across the UK. They, and their schools, will each receive prizes of £100 for the school and £100 gift vouchers for the child.

From those 120 runners-up, a shortlist of 24 finalists will be chosen. They and their schools will receive prizes of £500 for the school and £500 of gift vouchers for the child.

From the finalists eight winners will be chosen. They will also receive prizes of £1,000 for the school and £1,000 in vouchers for the child.