The stamp was printed in 1904, but was quickly withdrawn from sale one of Britain’s rarest stamps has been sold for £400,000 by a Jersey-based stamp dealer.

The stamp was issued on 14 March 1904, but was withdrawn almost immediately after issue.

Only 19 sheets were ever printed and on withdrawal, almost all were destroyed.

Director of Stanley Gibbons Investment, Keith Heddle, said: “The 6d I.R. Official is one of the most sought-after stamps in the world.

“Understandably our client is thrilled to own such a unique and coveted piece.”

Stanley Gibbons Investment said the stamp was rare because it was issued on the same day as an order came into force withdrawing all official stamps from use. 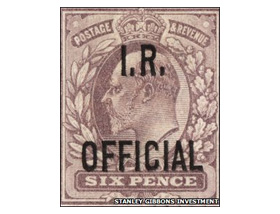