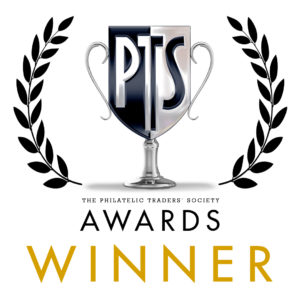 The winners of the first PTS Awards have been revealed, honouring companies and individuals who have helped the hobby during 2020.

Ambassador of the Year

The ‘Ambassador of the Year’ was jointly won by Markand Dave and Bill Barrell.

Markand has dedicated his time and energy to many projects within the philatelic community, including his work with ‘philaminars’ which were a massive success and a brilliant concept to highlight during lockdown.

Meanwhile, Bill was nominated for the support he has given the council this year on several projects including Virtual Stampex. Bill actively took a role in Virtual Stampex, helping to introduce people to the concept and the event itself. The stamp and postal history dealer is also on various other societies. including the ABPS as the PTS representative.

Creative Concept of the Year

‘Creative Concept of the Year’ was won by Michael Cortese from NobleSpirit and Charles Epting of HR Harmer who launched the popular ‘Conversations with Philatelists’ multi-platform digital podcast during 2020, covering a wide variety of topics and connecting people from all over the globe.

Legacy champion of the Year

‘Legacy champion of the Year’ was awarded to Graham Beck for being one of the first people to set up a YouTube channel dedicated to stamps and stamp collecting. Graham’s ‘Exploring Stamps’ channel has become increasingly popular during 2020, with many societies enjoying the videos as part of their virtual meetings.

Meanwhile, auction house Spink were awarded the ‘PTS contributor of the Year’ following their sponsorship of the first Virtual Stampex online event.

Suzanne Rae, Chair, PTS said: ‘We originally launched the awards to help celebrate the successes of 2020 and to keep inspiring people after such a tough year. 2020 has seen many companies think on their feet, take risks, pivot their business and come up with outstanding creative initiatives.

‘We are delighted to be able to announce these winners and are thrilled to be showcasing the amazing work people have done within the hobby and the trade… I want to take this opportunity to thank everyone for the nominations and for joining in with the awards.’