“Off with her head!”

The British Postal Museum & Archive (BPMA) is delighted to present the display “Off with her head!” which will form part of the ABPS National Philatelic Exhibition in the Dewars Centre, Perth 19–20 October 2012.

The display consists of 4 sections; A Portrait with Problems, The Battle for Change, The Gentleman Album and The End of the Affair.

In 1964 Tony Benn became Postmaster General and immediately set about trying to change conservative thinking at the Post Office. He had determined ideas about stamps – to widen their scope, and to remove the Queen’s head. He found a like mind in David Gentleman, who already had several stamp designs to his credit. 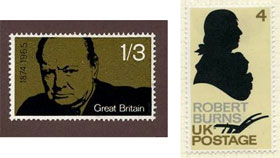 The Queen did not agree with her head being removed from stamps and in response Gentleman created a small cameo head in profile as an alternative.

The cameo head came to be accepted in place of the Wilding portrait. It was used from the Landscapes issue of 1966 until it was replaced with the new Machin commemorative head in 1968.

Uniquely, for the Robert Burns issue designers (all Scottish) were instructed that they could also submit “non-traditional” designs. In practice, this meant designs without the Queen’s head. Several did, and a total of 21 (out of 40) carried the legend U.K. POSTAGE, or a crown, or royal cypher.

Some 12 different designs were essayed and those first chosen were “non-traditional” signatures of Burns. However, in the meantime, it had been decided to retain the head of the monarch and so the designs were re-essayed with that addition. In the end, a more traditional approach was preferred.

“The BPMA is proud to be part of the ABPS National Philatelic Exhibition 2012. On display will be highlights, never seen before, from the BPMA’s world-class philatelic collections: in particular, essays of unissued designs of British stamps from the present reign including the 1966 Robert Burns issue.”