Last Post exhibition on show at the Royal Engineers Museum

Last Post: Remembering the First World War will go on show at The Royal Engineers Museum in Gillingham, Kent, from 8th June until the 1st September 2011.

The exhibition, curated by The British Postal Museum & Archive (BPMA) and Churchill Museum & Cabinet War Rooms, explores the vital role played by the Post Office during the First World War. It tells the stories of postal workers at war and on the Home Front and examines the essential role played by postal communications. 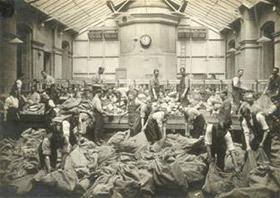 Over 75,000 men left their jobs in the Post Office to fight in the First World War, with 12,000 joining the Post Office’s own battalion – The Post Office Rifles. As the men left to fight, tens of thousands of women joined the Post office workforce temporarily. For the first time, women were allowed to perform duties from which they had previously been excluded such as sorting mail and delivering mail in urban areas. Postal communications (including telephones and telegraphs) was an important tool in connecting Headquarters with the front line, as well as keeping soldiers and people at home in touch.

Last Post demonstrates how letters were delivered to the front, how the Post Office dealt with dramatic increases in volumes of mail and the vital part that censorship played in the war effort.

“The role of the Post Office in the First World War is an exciting story of bravery, spies and resilience against all odds, told through this fascinating exhibition.”

The Royal Engineers Museum will also be displaying some of its rarely seen Postal & Courier Service items, including elaborate maps detailing how postal lines were maintained, items from the Western Front (including a ‘hard tack’ biscuit that was sent from the front through the post and was delivered in one piece!) alongside photos, special RE envelopes & stamps and the war diaries of those who put their lives on the line to maintain this vital service.

An online version of the exhibition can be viewed at http://www.postalheritage.org.uk/exhibitions/onlineexhibitions/remembering-the-first-world-war