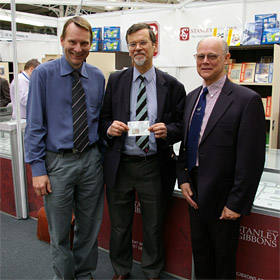 Project co-ordinator and member of the FIPSG, Stefan Heijtz, recounts, ‘During my recent stay in the Falklands, I discovered that Nutt Cartmell’s stamp collection, which was bought by the Museum and National Trust in Stanley in 1995, does not contain a basic Falklands stamp collection; I thought that there was a good basic collection which could be used for illustration purposes in connection with temporary displays and for educational reasons. However, all that was bought was a large number of duplicates and complete sheets from the 1960s and 70s, most of which have been sold since they were not of interest to the Museum.

Sadly, the Museum simply does not have the funds to purchase a collection so I set about building a collection for them.’

An album was bought and refurbished with new pages provided by Stanley Gibbons. Thereafter members of the FIPSG set about donating what they could from their own collections before contacting Stanley Gibbons about a 1928 2½d Provisional which a keen-eyed member of the group had seen featured on their website.

‘We are delighted to be able to help preserve the cultural heritage of the islands through the donation of the Falkland Islands 1928 South Georgia 2½d on 2d Provisional’ said Stanley Gibbons Marketing Manager, Alex Hanrahan. ‘Having been produced on 7th February 1928 during a shortage of 2½d stamps, it was subsequently withdrawn on 22nd February having been in use for just over two weeks. It’s a valuable and sought after stamp for the collection as only 1179 were issued.”

Following the donation, just one stamp is needed to complete the collection; a 1933 Centenary £1. If you can help with a mounted mint or unused example, contact Stefan Heijtz: stefan@novastamps.com 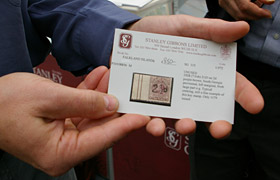