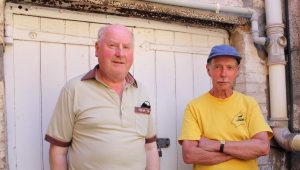 For the first time in its history the ABPS Congress Medal in 2021 has been awarded jointly to two collectors who worked as a team.  Barry Burns and Bernard Mabbett visited St Helena on two occasions to preserve the philatelic records and stamps of the island.

The pair visited the island to do research but after three weeks had found very little new information on the stamps or workings of the St Helena Post Office.  Then they were shown a cellar containing two rooms packed with boxes and folders of paperwork.  The postmistress said she would like it archived but did not have the staff or budget to undertake the work.  Barry and Bernard agreed they would return to do the work themselves.

The task became urgent when they heard that the St Helena Government wished to empty the cellar and dump everything.  In 2013 Barry and Bernard and two fellow philatelists returned to St Helena and spent five weeks sorting the paperwork and ledgers and putting them into 100 plus archive boxes.  These had to be frozen to kill the white ants which had already destroyed some of the paperwork.  The size of the task and the limited time available meant that only rudimentary sorting could be accomplished so the friends intend to return to complete the work.

Before they left Barry and Bernard were asked if they were prepared to return to write up the Government stamp collection consisting of Ascension, St Helena and Tristan da Cunha stamps. So, in 2019 they returned to the island.  The collection had been kept in very poor conditions on old non-acid-free card but by the end of four and a half weeks 996 album pages had been written up and mounted.  This was only achieved by working long hours seven days a week.  Now there is a permanent philatelic display in the museum which is changed on a regular basis.  The whole collection is being scanned and downloaded onto a CD.

Had they not undertaken the work the archives would have been destroyed and the stamps deteriorated beyond rescue.  The archives and stamps are now available for study by future generations.

In addition both Barry and Bernard have held several offices in the West African Study Circle and Middlesbrough & District Philatelic Society.

The Awards Committee is delighted to announce that three collectors have been recognised with the Award.  They have worked tirelessly for local societies, specialist societies and federations.  We offer them, and the Congress Medal Winners, our thanks and congratulations.